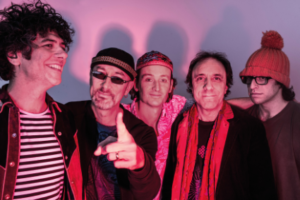 Gong have had many, many line-ups. Formed when Australian beatnik/freak Daevid Allen quit The Soft Machine and moved to France at the tail end of the ’60s, before debuting in 1970 with Magick Brother, the band have remained fluid, even playing without their founder from the mid-to-late ’70s, fracturing and reassembling and constantly taking on new shapes and forms: an undeniably amorphous unit. David Bowie told Vanity Fayre in 2003 that Daevid Allen’s Banana Moon is one of his favourite albums, and today everyone from indie artists Temples and Ty Segall to hip hop artist Madlib and techno DJ Surgeon are inspired, and borrow, from Gong’s music and ideology. The funky grooves, avant-garde flourishes and counter-cultural stance is timeless. So timeless that Gong fully exists even without their creator and guiding light. For those who are unaware Daevid Allen died in March 2015.

“I have been co-presenting The Interesting Alternative Show with Steve Davis for the last six years or so,” begins the story of how Gong’s new singer/guitarist Kavus Torabi met Daevid. “In 2011, Steve rang up excitedly saying ‘You’ll never guess who we’ve got as a guest next week… Daevid Allen.’ I couldn’t believe what I was hearing. I’d met Daevid briefly a couple of times with Tim Smith [Cardiacs] but never properly. As a lifelong Gong lover, this filled me with delight. Straight away the two of us seemed to really click, within minutes the conversation had taken a turn for the absurd and I was more than a little flattered when he told me, after about an hour, ‘You’re a poet man, I can tell.’ 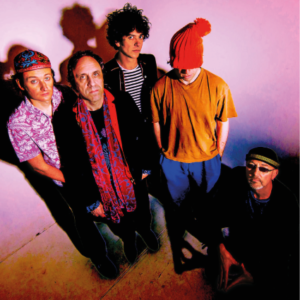 “Over the forthcoming months we would text each other on a fairly regular basis, whenever Daevid was in town playing a gig he’d get in touch to see if I wanted to come along. ‘I’ve been thinking about this a lot,’ he told me, ‘Do you want to play guitar in Gong?’ This came somewhat out of the blue. ‘But you’ve never actually heard me play, Daevid’ I told him. ‘I don’t need to,’ he replied. ‘I felt the same way about Mike Howlett when I met him too and I’m never wrong about this stuff.’ Of course I said ‘Yes’ instantly. ‘You know, I can’t play like Steve Hillage,’ I told him. His response was priceless ‘I don’t care about what you can’t do, I care about what you can do.’
“Since being a teenager, I have often come up with riffs that, while I loved them, had to be shelved because I always felt they sounded a little TOO much like Gong. One of which I started playing. Daevid got up and started improvising lyrics and melodies over the top, his beautiful eyes twinkling. This would become ‘When God Shakes Hands With The Devil (from I See You).’ ‘Wow Kav!’ Daevid said afterwards, ‘Got any more like that?’ Realising that 20 years or so of shelved riffs had not gone to waste, I blurted out ‘Yeah! Fucking loads!’

Kavus joined Gong in 2014 in time for the last album the “new” band made with Daevid, I See You, unaware of the direction his new gig as a guitar player would take. “It was shortly after our Brazilian tour in March 2014 that, following a broken arm, Daevid told us that he had been diagnosed with cancer and would be unable to fulfill the 47 date world tour that had been booked to promote [the album]. To my, and I guess all of our, minds there was no question that he would beat this thing. The most enlightened and switched on guy I ever knew, with light shooting out of every pore, he seemed indomitable. Nonetheless, he started making noises about how he wished the band to continue without him. I think everyone in the band felt ambivalent about this, particularly as we watched the majority of the gigs get cancelled upon news that he was too unwell to fulfill them. I certainly had no desire to front it. I have my own band Knifeworld in which I play this role. We did, however, have a new album to promote, so we reluctantly agreed to play the remaining shows and bow out gracefully after that. Each night we sent Daevid recordings or links to YouTube footage and, from his sick bed in Australia, he wrote gushing praise about what had happened to the band and how this was exactly what he had hoped. By the end of the tour and with the full blessing of Daevid we decided to carry on. 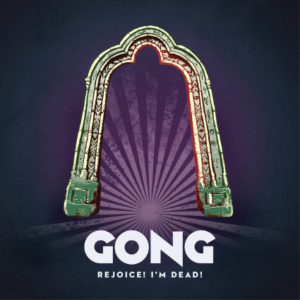 “Rejoice! I’m Dead! came together over several weeks in an East London rehearsal studio.In terms of the writing, the songs became very elastic, what may have been brought to the band as a fixed idea, through experimenting, discarding, expanding and mutating evolved into the songs as you hear them now. Every member was key in the development of each song,” closes Kavus. Thus, Kavus (vocals/guitar), Fabio Golfetti (guitar/vocals), Dave Sturt (bass/vocals), Ian East (sax/flute) and Cheb Nettles (drums/vocals) tookon the mantle of steering the Teapot further into outer space and the inner ear.

On the album you’ll also notice the voice ofDaevid in an early song idea rehearsal, along with Gong alumni Steve Hillage, Didier Malherbe and Graham Clark. Fans of the “Virgin trilogy” won’t be let down!

In the words of bassist Dave Sturt: “You bet it’s a fucking Gong record!”

It depends on your knowledge of Gong history and what constitutes as a Gong record, but if Rejoice! I’m Dead! is classified as their 28th album the Gong legacy is the strongest it has been since 1974. Consider the differences between Angel’s Egg, Gazeuse!, Floating Anarchy and I See You, the various splinter projects and collectives… what is it that make Gong who they are? Their spontaneity and numerous Phoenix-like rebirths – this is just the latest installment. Nothing more, nothing less. New members and old coalesce, the sound unmistakably Gong.

Even without Daevid Allen Gong will continue ….. And long may it do so.