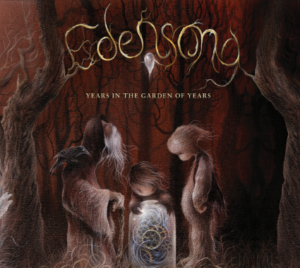 EDENSONG is a progressive rock quintet from New York City. The band’s selfreleased
2008 debut The Fruit Fallen was hailed as a “masterpiece” by critics, and helped to pave the way for live shows and notable festival appearances throughout North America. At over 70 minutes of new music, their 2016 followup, Years In The Garden Of Years is even more ambitious than it’s predecessor, and will be sure to appeal to fans of both classic progressive rock and metal. The concept album features an extended song cycle on themes of time, each song a different scale and perspective. The melodies are more memorable, the riffs more powerful, the flute playing more inventive and propulsive. The songs prominently feature immersive new textures, from lush keyboard and orchestral arrangements to esoteric percussion from around the world, such as hang drum and balinese gamelan. Years In The Garden Of Years is mastered with audiophile precision by grammy winning engineer BOB KATZ, and the cd release features stunning original cover art and booklet illustrations from beloved surrealist painter DAN MAY.
EDENSONG has recently made a return to live performances and plan to play extensively in support of the new record.

Years In The Garden Of Years Track Listing:

3. In The Longest Of Days