Canadian rock legend Randy Bachman is gearing up to take fans on a journey through his back catalog with a new live DVD that features performances of some of his best-known songs interspersed with the behind-the-scenes stories of what inspired them.

Titled ‘Every Song Tells a Story,’ the new release — which comes with a bonus CD of the performance — captures an April 2013 gig recorded at Pantages Playhouse Theatre in Winnipeg. The disc finds Bachman revisiting hits and fan favorites from his days with the Guess Who and Bachman-Turner Overdrive including ‘These Eyes,’ ‘Undun,’ ‘No Sugar Tonight’ and, of course, ‘Takin’ Care of Business.’ Due Aug. 19, the package repurposes the format Bachman’s used for his long-running Canadian radio show ‘Vinyl Tap,’ which inspired a book-length collection of his stories in 2011.

Bachman is currently on the road with Fred Turner as Bachman & Turner; they’ll travel to the U.S. for a series of dates this summer and fall (listed below). Check out the ‘Every Song Tells a Story’ track listing below, along with a list of scheduled shows and the trailer for the DVD. 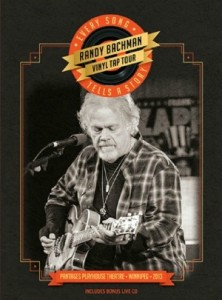