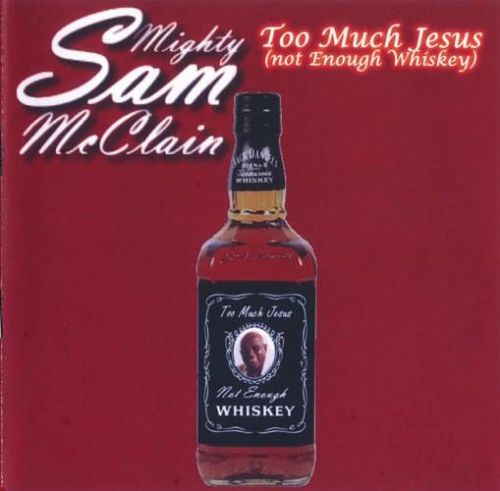 My first nominee for 2012 Soul Blues album of the year is……………….Mighty Sam McClain’s latest release!  Featuring a great band and music production values that remind me of the best of the Motown sound, Too Much Jesus (Not Enough Whiskey), is a musical tour de force.  Mighty Sam had his first hit back in 1966 with a cover of Patsy Cline’s Sweet Dreams and then went into hiatus until the late 1980’s when Hubert Sumlin reintroduced him to blues audiences.  He has lost none of his vocal prowess over the years and at the age of 69 is singing with a joy and power that just reach out from the album and grab you.
Like many soul blues recordings, this release is heavy on the funk, rhythm, and gospel. While most of the rhythm and blues genre has scrubbed itself of all church based references, soul blues still embraces one of the cornerstones of the blues…gospel style singin’ about God and the ups and downs of life….with rhythm. While this isn’t a gospel album, Mighty Sam doesn’t shy away from several tunes that convey his gospel roots including the title track, Too Much Jesus (Not Enough Whiskey). Can You Feel It is a great rocking gospel peace song with just a hint of the edginess that Dan Auerbach and the Black Keys have introduced to the blues genre in the last several years. Dance is just pure funky infectious dance music.  Feel So Good is a catchy tune that shows off the talent of his seven piece band and longtime song writing collaborator

and guitarist, Pat Herlehy.  Hey Baby is a great “love at first sight” upbeat tune.  Missing You is a pretty slow song with some nice guitar licks that I really enjoyed.  Mighty Sam’s powerful voice combines with some nice saxophone riffs to make Real Thing my favorite tune on the CD though the jazzy love song Tears gives it a good run for the money.
Mighty Sam McClain says he is thankful to have been blessed with the talent to pursue his vision of the blues. Personally, I am thankful artists like Mighty Sam continue to introduce the soul blues to audiences around the world.  There isn’t a better ambassador that I can think of!

Mighty Sam McClain – Too Much Jesus (Not Enough Whiskey)