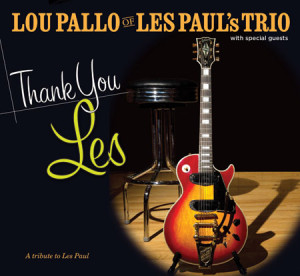 I love the rockin’ blues! There is nothing in the world better than listening to an electric guitar playing to a blues beat. We take the electric guitar for granted today but back in the 1940’s, it was new and different. A humble unassuming and very gifted guitarist named Les Paul created one of the first solid body guitars. He eventually received a patent for it in 1962. The Les Paul sound inspired an entire generation of young guitar players and he is credited with helping to create the rock and roll genre.
To commemorate his talent and his invention, Lou Pallo, long time rhythm guitarist for the Les Paul Trio, has put out a superb album, Thank You Les. And he has a world class group of guitarists and singers that contribute to the cuts on the CD. Keith Richards, Steve Miller, Slash, Joe Feliciano, and Billy F Gibbons are just a few of the 19 folks that lent time and talent to the recording.
When I was growing up, two guitarists were fixtures on my mother’s expensive stereo system: Chet Atkins and Les Paul. Lou Pallo and the current rendition of Les Paul’s Trio fired my memories of those times with instrumental recordings of Caravan, Avalon, and Mr. Sandman that are just simply superb. Keith Richards and Lou Pallo do a touching rendition of a song Bing Crosby and Les Paul made a number one hit the Christmas of 1945, It’s Been a Long Long Time. I loved the jazzy blues tune, Tell Me What’s the Reason, with Steve Miller on guitar and vocals. Billy Gibbons contributes a beautiful instrumental rendition of the classic September Song and Jose Feliciano, who I haven’t heard in forever, sings a great Latin tune, Besame Mucho. Slash offers up my favorite cut on the album, a sterling performance of Deep in the Blues.  I also enjoyed Saint Louis Blues, the first blues tune to be a hit as a pop song back in the 1920’s. And to top it all off, the album finishes with Somewhere Over the Rainbow sung by Melinda Doolittle….that song just gets to me.
I love my blues and my rock and roll but spending an evening listening to classic music performed by world class musicians touched my heart and brought back a flood of recollections. Lou Pallo and the Les Paul Trio still play Monday nights at the Iridium club in New York City. If you live close by or are lucky enough to be in the City on a Monday, drop by and catch a part of music history. And thank you Lou for bringing us back such great memories and the music of the Les Paul era! 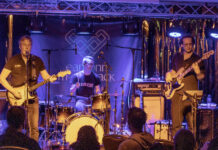