Take the rockin’ blues, mix in a dash of hyper bluegrass, and a hint of the Black Keys and Seasick Steve and you get a refreshing new sound emanating from New South Wales, Australia in the person of solo artist Claude Hay. Using a bit of technology, Claude’s one man sound is powerful and dynamic enough to have fooled me on my first listen without reading the CD notes; I assumed his band was a duo! I Love Hate You is a well produced piece of musicianship that had me rockin’ through the tracks.

“Best Days” is my favorite cut. It is an infectious hand clappin’ tune with a strong driving rhythm. As the lyrics indicate, he definitely has that mojo workin’. It is a highly accessible song and should get mainstream airplay. Claude cranks out a rockin’ version of the Beatles “Come Together” that rivals my favorite cover of the song by Joe Cocker. He then tackles the prison blues with a very innovative merging of the new blues sound and traditional delta rhythms that is simply fantastic entitled “Hound”. “Don’t Bring Me Down” and “Good Times” are blues rock that is perfect for crankin’ up as you leave the parking lot from work on a Friday headed for your favorite watering hole to get the weekend going. The title cut, “I Love Hate You”, is a great crankin dance song and “Turn it Up” is an edgy funk tune.

“Blues Train” displays Claude’s banjo pickin’ skills as he cranks out yet another catchy song that encourages us to get on board. I’m game Claude! He shows an originality and talent that will garner him a loyal following as the years go by…it should be quite a ride! This CD has made its way into my Ford F-350 King Cab center console….perfect music for cruising and bluzin! Buy it! 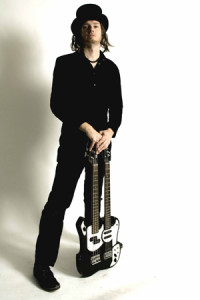 taken from his homepage:

Hailing from the Blue Mountains near Sydney, awardwinning Australian solo artist Claude Hay blends slide guitar, sitar, bass and drums to create music that invokes the best of stomping traditional blues, hard rock and booty-shaking funk, all delivered with chops to burn and a vocal range to match. Claude is perhaps the world’s ultimate Do-It-Yourself musician – forging his live sound on the back of looping technology which allows him to create a band vibe without the band. This appoach has seen this fiercely independent artist build an audience for his music globally with the release of three award-winning home-made albums.

Taking DIY a step further than most, Claude has built all his own equipment: there’s ‘Betty’, his doublenecked guitar which he made out of a kitchen benchtop; there’s Stella, his new ‘Cigar Box’ guitar which started its life as a six dollar baking tin. He’s also built his own dome house and studio from the ground up,and pimped out his tour van with a shower and bar(a great move when you consider how much time he spends on the road).

‘I Love Hate You’ is Claude Hay’s brand new third album and was recorded and mixed in his home studio ‘Deathstar’ (a huge back-lit Darth Vader mask overseeing production) and continues Claude’s move away from traditional blues and back to his love of rock – both alternative and hard – with his childhood love of 80’s cock rock starting to show its influence. The signature slide is still there, along with the four-on-the-floor rhythms and gut-bucket sensibility, but new to the mix on album number three is an increased focus on guitar riffage along with a more refined aproach to songwriting and
production.

This new release sees Claude in a rare collaborative mood, with the input of other musicians on a number of tracks, most notably the rhythm section of Sydney band Chase The Sun. Mastering is courtesy of the great William Bowden (who mastered Gotye’s last album amongst thousands of others in his prestigious career).‘I Love Hate You’ is a concept album – dealing with the things Claude loves, hates and loves to hate. From loved ones, great gigs, motor vehicles and treacherous trans-continental bus rides, bad customer service and indifferent radio programmers.

‘I Love Hate You’ follows up 2010’s ‘Deep Fried Satisfied’, a very successful album for the indie artist that allowed him to get a foot in the door overseas. While promoting the launch of the album in the US, Claude performed live on the National Public Radio Network (which boasts a weekly listenership of about 27 million) and ‘Deep Fried Satisfied’ promptly shot to number nine on the US Billboard Blues charts in response. The album went on to rank number
five on Amazon’s top ten Blues albums of 2010, with track ‘Miss You So’ polling third in the Best Blues Song of the Year category.

Claude’s affection for New York-style pizza was the inspiration for the album’s lead track ‘Get Me Some’ which won the Australian Blues Music (Chain) Award for ‘Best Song of 2011’. A track about the aggravation caused by faulty printers, ‘How Can You Live With Yourself’, hit number one
on Triple J radio’s Unearthed chart around the same time. ‘Kiss The Sky’ (2007) is the debut lo-fi masterpiece which started the story for Claude Hay’s solo career and still sells like hotcakes whenever Claude Hay performs at festivals and venues around the world.