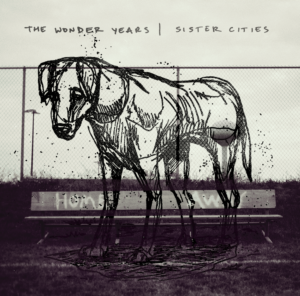 The Wonder Years’ highly-anticipated new album ‚Sister Cities‚ has closed an excellent first week at #1 in LP Vinyl Albums, #1 in Record Label Independent Current Albums, #2 in Current Alternative Albums, and #18 in the Billboard Top 200 in the United States – among others.

Nearly three years since the release of their highest-charting album (No Closer To Heaven, 2015), The Wonder Years return with ‚Sister Cities‚, their sixth LP and most transformative work to date. Recorded at Sunset Sound with Joe Chiccarelli (Manchester Orchestra, The Shins, Spoon) and Carlos de la Garza (Jimmy Eat World, Paramore), ‚Sister Cities‚ is an album about distance, connectivity and the way humanity towers above boundaries.

“There is a lifetime yelled in every punk song, captured in the desperate
and catchy ‘Sister Cities’.” – NPR Music

“From the first notes, it’s already clear that The Wonder Years are stepping
into uncharted territory.” – UPROXX