“It was 1974, I was 19 and I had just hitch-hiked from San Antonio to Nashville,” Earle said in mid-Texas-cum-Greenwich Village drawl. “Back then if you wanted to be where the best songwriters were, you had to go to Nashville. There were a couple of places where you could get on stage, play your songs. They let you have two drafts, or pass the hat, but you couldn’t do both.
If you were from Texas, and serious, Guy Clark was a king. Everyone knew his songs, ‘Desperados Waiting For A Train,’ ‘LA Freeway,’ he’d been singing them before they came out on Old No. 1 in 1975. So I was pretty excited when I went into the club and the bartender, a friend of mine says, ‘Guy’s here.’ I wanted him to hear me play.
I was doing some of my earliest songs, ‘BenMcCullough’ and ‘The Mercenary Song.’ But he was in the pool room and when I go in there the first thing he says to me is `I like your hat.“

“Now, I am a terrible bass player…but I was the kid, and that was what the kid did. I took over for Rodney Crowell. At that time Gordon Lightfoot’s ‘Wreck of the Edmund Fitzgerald’ was a top ten hit, which was amazing, a six and half minute story song on the radio. So Guy said, ‘we’re story song writers, why not us?’ So we went out to cash in on the big wave.”

“No way I could get out of doing this record,” Steve said when we talked over the phone from Charlotte, North Carolina, that night’s stop on Earle’s ever peripatetic road dog itinerary. “When I get to the other side, I didn’t want to run into Guy having made the ​TOWNES record and not one about him.
„GUY“ wasn’t really a hard record to make,” Earle said. “We did it fast, five or six days with almost no overdubbing. I wanted it to sound live…When you’ve got a catalog like Guy’s and you’re only doing sixteen tracks, you know each one is going to be strong.” 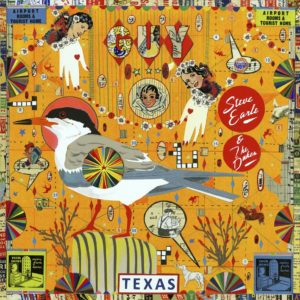 “You know,” he said, “as you live your life, you pile up these regrets. I’ve done a lot of things that might be regrettable, but most of them I don’t regret because I realize I couldn’t have done anything else at the time.
With ​GUY, however, there was this thing. When he was sick – he was dying really for the last ten years of his life -he asked me if we could write a song together. We should do it ‘for the grandkids, ’ he said. Well, I don’t know…at the time, I still didn’t co-write much, then I got busy.

Then Guy died and it was too late. ​That, I regret.”