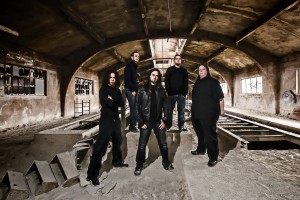 Scarred is a Death Metal Band from Luxembourg formed in 2003. Initially they started out as a Thrash Metal Project which released an E.P. called “Inner Scars” in 2004. However, through the years and after various line-up changes, they evolved towards a heavier and more brutal sound. In 2009 their first full-length album “New Filth Order” was released. Since then, Scarred has performed alongside many great artists and on major stages such as Wacken Open Air and Metalcamp. Due to many different influences, Scarred’s precise genre is hard to define and should be discovered.

On May 10 2013, Scarred has released their new album entitled “Gaia/Medea” under the banner of Klonosphere / Season of Mist Distribution. This Opus was mixed and mastered by Jochem Jacobs (Textures) at Split Second Sound Studio and features a guest solo by Attila Vörös (Nevermore, Leander Rising).

Off the back of their stunning slot at Bloodstock Festival, Luxembourgian metallers Scarred announced as main support to Australian mentalists Psycroptic!

The quintet can be seen at the following dates: