Bokanté is a very unique encounter between a new world music supergroup band, US based and very rich in the sound of the delta and the desert, kind of very dynamic fusion led by Snarky Puppy’s Michael League. The band’s second album “What Heat”, on Real World Records, available as LP/CD/DL, just these days released worldwide as well as in the US and France, is a collaboration with the Metropole Orchestra (Orkest in Dutch), the world’s leading pop & jazz orchestra, conducted by Jules Buckley and based in The Netherlands. Michael League and the Metropole Orchestra first worked together on the Grammy Award winning ‚Sylva‘. Even this collaboration is a whole different beast, fans of Snarky Puppy will for sure not be disappointed. This band’s members are united in the belief that music should be a voice for the voiceless, a force for change against a rising tide of exclusion and indifference in a world that is, well, reaching boiling point.

Michael League: “Metropole Orkest is my absolute favorite symphonic ensemble in the world for playing contemporary popular music. Their versatility is unmatched and they’re a genuine pleasure to work with. I think of this collaboration as equal parts band-vocals-orchestra and we’re exploring and shaping the music together.”

The Metropole Orchestra is a multiple Grammy-winning hybrid ensemble, part jazz big band, part symphony orchestra. As a specialist in all styles and with a deep understanding of music, the metropole is at ease playing jazz and pop, traditional music, world music and film scores and has collaborated with legends like Ella Fitzgerald, Dizzy Gillespie, Pat Metheny, Brian Eno, Herbie Hancock, Bryan Ferry, Gino Vanelli, Robert Glasper and Gregory Porter, just to mention a few. Over the years, Metropole Orkest received no less than 17 Grammy nominations and won 3. Most recently for ‘Best Contemporary Instrumental Album’ in 2016 with Snarky Puppy.

The word Bokanté means ‚exchange‘ in Guadeloupean Creole, the language of vocalist Malika Tirolien’s childhood island. A great name for a group of musicians from 5 countries and 4 continents, whose cultural and musical identities converge in the music they create together. Their music traces the blues, from its roots in Africa and the Arab World, and throughout the diaspora, and places it firmly into a very modern context. Band leader Michael League (Snarky Puppy) plays everything from oud, Minimoog and fretless acoustic bass to bendir, riq and daf frame drum.

Bokanté’s members have achieved great success in their own individual paths (with Paul Simon, Sting, Snarky Puppy, Yo-Yo Ma, etc.) and each musician’s personality shines through in songs that speak to the challenges and strengths of the complex socio-political environment in which we live. The vocalist Tirolien paints beautiful lyrical images and tells stories that tackle issues head on. Exploring the reality of this very important -and potentially dangerous- moment in time, whilst still celebrating who we are and what we have in spite of everything.

On the new album, Bokanté have worked with Jules Buckley and the Metropole Orkest. Band member Michael League first worked with the orchestra on the Snarky Puppy album Sylva:

“This is the first album we’ve made together since ‘Sylva’, and I believe it to be every bit as adventurous. The Metropole is a rarity in that it has the versatility and skill set to play across a wide variety of modern music styles with deep understanding. It opens up possibilities as an arranger that would not be available with other orchestras. Jules and I did our best to take full advantage of those possibilities in every way we could.”

“I couldn’t imagine doing any sort of orchestral record without Jules,” he continues. “He’s so in tune with the role the orchestra assumes in the context of a collaboration. He’s a true musician, a good friend and he lives in the world of modern music. He gets it.”

“Part of Michael’s brilliance as a composer is the way he captures the mosaic feeling of the group,” offers Buckley. “Each member of Bokanté is a virtuoso on their chosen instrument and a musical cog that eventually forms the overall sound. We honed the various elements and chipped away at anything we felt was unnecessary, and re-wrote when we felt we’d missed the target, to make the record feel even more cohesive. There’s such a beautiful imagining of these compositions with an absolute non compromise on the groove and feel.”

There is André Ferrari, a mohawked Swede whose innovative flourishes – on goat nails, grouse pipe, wooden Japanese bicycle bell – were a trademark of the Swedish folk outfit, Väsen, and whose self-penned ‘Shapons Vindaloo’ is the first track Snarky Puppy ever recorded. There is special guest Weedie Braimah, a Ghanaian djembe master whose skills stretch back for generations.    And then, of course, there is Malika Tirolien, the Montreal-based Guadeloupian vocalist with the huge honeyed voice. “Malika’s voice covers several frequency bands,” says Buckley, “so the challenge on What Heat was to make sure there was enough space for all the different elements – winds, strings, brass, percussion, guitars, drums, more drums – to thrive during the recording. I think Mike’s producing achieved that task brilliantly.”

Trained in classical piano and jazz, Malika Tirolien was fronting a hip hop-leaning group called Groundfood that supported Snarky Puppy in Quebec and duly blew League and Co away. “The whole band were like, ’Who the **** is that?’” grins League. “She was one of our first guests on the [2014] Snarky Puppy record Family Dinner Volume 1; she sang in Creole and everybody loved how it sounded. When I started writing music for Bokanté I was thinking of singers and she was the only one I thought would work. Plus we’d known each other for five years by then and had become like family.”    The French-based Creole language has a percussive flow; Malika Tirolien’s dialect is particular to Guadeloupe and not dissimilar to the neighboring Caribbean island of Martinique: “It’s a very funky language to listen to. Of course the whole island speaks French, their colonial language, but Creole is really a Guadeloupe thing so we thought it was more genuine for her to be expressing herself in this language – she was happy about that.”

Tirolien has the gift of conveying real emotion, even if we don’t understand what it is she’s saying.    “The important thing for us is that the groove feels good and the melodies resonate within you,” says League. “Because you don’t get to that second step – what are the lyrics about, what is the statement? – until you’ve actually been enjoying the sound. Then, seeing us as a group of people from five countries and four continents, each one with their own story and upbringing… all of that co-existing to create a sound that is harmonious and groovy and joyful is, in itself, a message.”  A smile. ”Then they read the lyrics and go, ‘Oh. She’s talking about some heavy stuff.’” 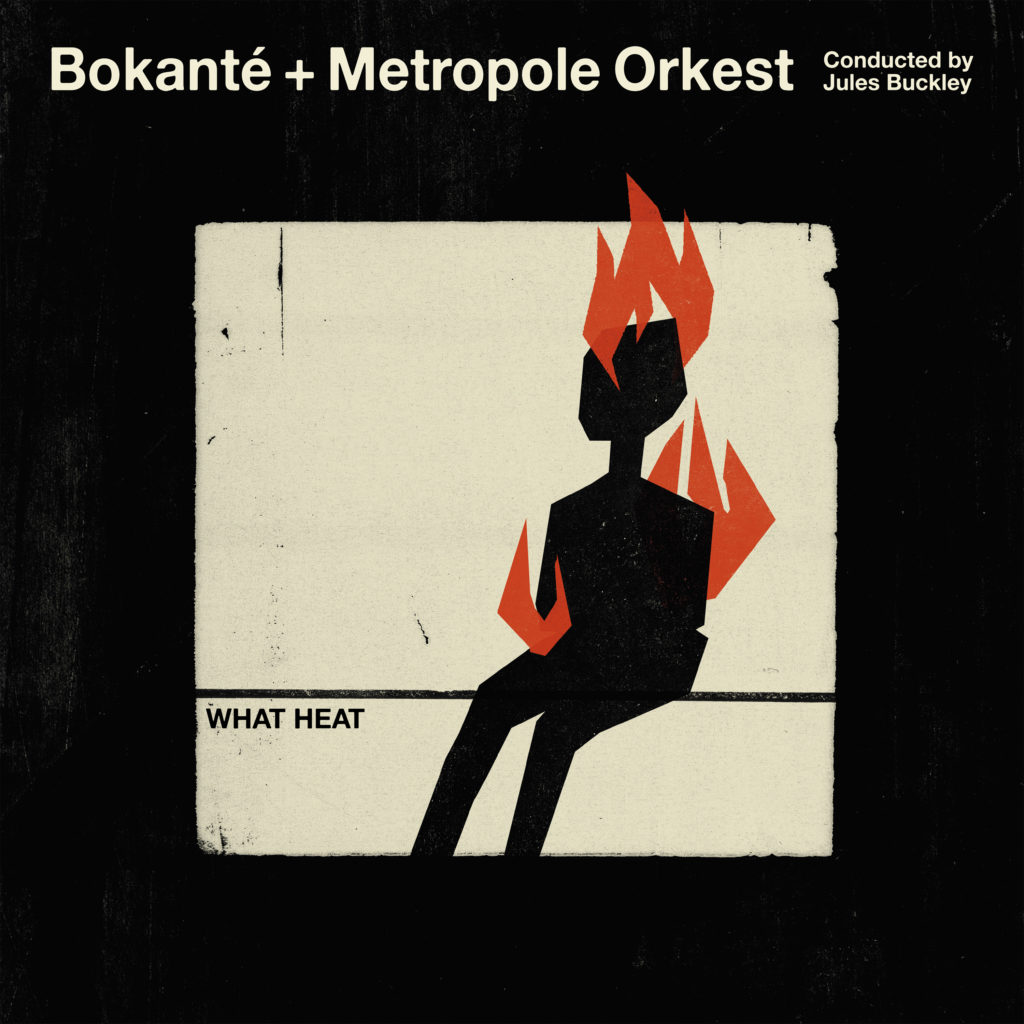 “This albums really rocks! It surprised me on a really high level. Fascinating the dynamics created through huge percussion, vocals, even as a fully choir and really awesome string arrangements and of course, the performance of the band Brokanté and this amazing Metropole Orchestra. But when maybe this music does not blow you away on the first steps, then this recording has a huge positive vibration, which is the high level recording itself. This definitely no ears can ignore. Often I listen to some tracks very late in the night, already in bed, just before closing all activities. Just on my phone, very intimate situation. These tracks are my non-plus ultra highlights, really further beyond: tracks 2, 4, 5, 6, 7 and 8. But I am sure: track 1 and 3 will follow soon!”

For more information, if needed: www.bokante.com

Title picture copyright by York Tillyer. On the picture, from Left to Right:

Many thanks to GroundUpMusic, especially to Jamie Margulies and Richard Straub!