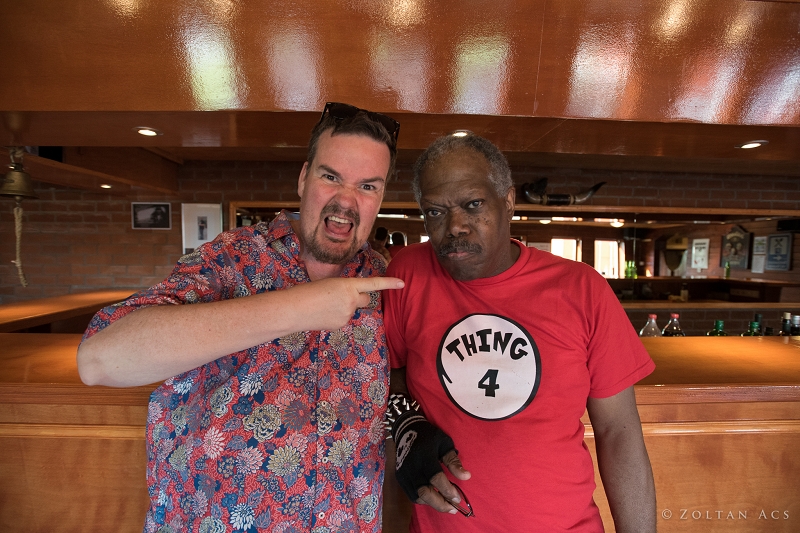 The last saturday in very hot august 2016 the Summer Jazz Bike Tour (ZomerJazzFietsTour) took place in the country side, north of Groningen in The Netherlands. In small villages many concerts with often improvised music happened in tiny medieval churches and barns. A good old friend from Bremen in Germany came by car that day and I followed his intuition to visit the most remarkable concerts I could imagine during this festival. One of these personal highlights was the concert of „The Thing & Joe McPhee“. This band plus Joe McPhee plays a mixture of jazz, noise, avantgarde-rock and punk together, and what’s coming out of this mix is called „Garage-FreeJazz“ or „Improvised-Punk“. For sure it’s loud and strong. In 2012 these three Scandinavian guys made a CD called „The Cherry Thing“ with Neneh Cherry, daughter of the legend Don Cherry. Joe McPhee, a legend himself, played with the very powerful Peter Brötzmann Chicago Tentet years ago, where he met the big sound of Mats Gustafsson, leader and founder of „The Thing“. „The Thing“ is: Mats Gustafsson: tenor and baritone saxophone; Ingebrigt Haker Flaten: double bass and bass guitar; Paal Nilssen-Love: drums and currently: Joe McPhee on saxophone and trumpet.

When we arrived at the location, a very small village called Krassum and in there a half open barn, Joe McPhee just finished his first set with „The Thing“. He came out of the barn and said just ‚hello‘ to me! And I told him: Hey Joe, we just came to see you! I was so surprised about his gesture, that a little while later I asked him for a short interview after the second set, which he accepted. And yeah, Zoltan, my brother in crime and excellent photographer, arrived by bike just in time. Here is the account of our conversation.

Bernd: Thank you Joe! Thanks God and very special to my friend Siebelt from Bremen, I came here today by car to visit your concert. And Zoltan came even by bike!

Zoltan: The musicians should bike as well!

(We are all laughing out very loud!)

Bernd: Dear Joe, how did you end up here at this festival?

Joe: Well, I played here once before with Peter Brötzmann in a duo, that was 2005. So today, this is the second time for me here. And it was because of an invitation by „The Thing“. We play together since 2001 or 2002 and yes, they invited me to play with them. Mats Gustafsson  came to the States in 1997 to join the Peter Brötzmann Chicago Tentet and I was invited the same year. That’s how I met Mats.

Bernd: Where are you from?

Joe: I am from New York, from the north of Manhattan, about 2 hours from there, a place called Poughkeepsie, New York (www.townofpoughkeepsie.com).

Bernd: My friend S. from Germany, who brought me here today by car told me, you are 75 years old? Is that true?

Bernd: You don’t look like that old at all!

Bernd: How did you start making music?

Joe: My father was a trumpet player. When I was eight years old he showed me how to play the trumpet. For 28 years I only played the trumpet. That means, I heard Albert Ayler and I thought: Oh my God! I also heard John Coltrane and Ornette Coleman and Eric Dolphy and a number of people. But when I heard the sound of Albert Ayler I thought I would like to play like he did. So I started to play the tenor saxophone from then on. But my father wasn’t so happy. (We both laugh).
Bernd: I can imagine.

Joe: Now I play both instruments.

Bernd: What do you like the most to play, the trumpet or the saxophone?

Joe: It’s not a question of which I prefer. It’s a question about what I feel most comfortable with in the moment. Because they are very different, their sounds are very different and their techniques are totally different too. The saxophone has a lot of possibilities, you press one key and move to another different one with both your hands. The trumpet you play only with three fingers and you have to make all the changes (he showed me) here. It’s complicated, I don’t think about one for the other one. When I play the trumpet, I think about the trumpet. When I play the saxophone, I think about the saxophone.

Bernd: Please tell me more about your very small trumpet. 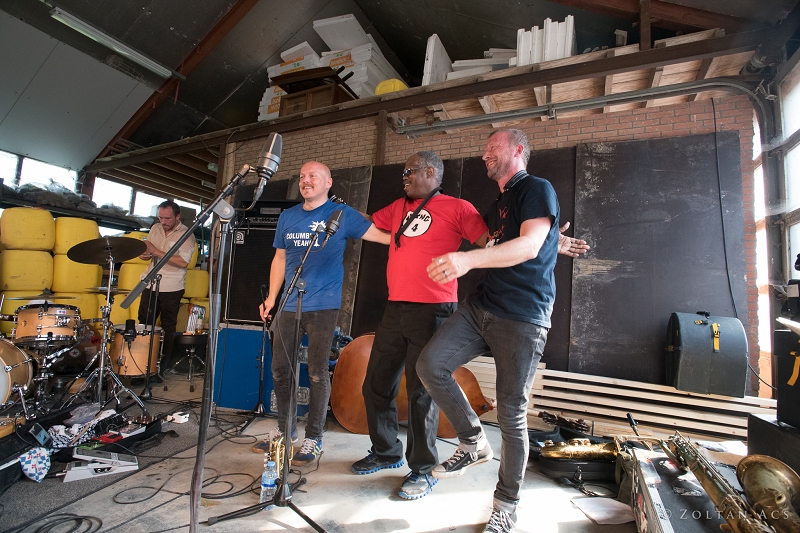 Joe: It is a pocket trumpet. I saw Don Cherry playing live with Ornette Coleman. From that moment on I started playing the pocket trumpet, now already for more than 50 years. I don’t play the normal trumpet so much anymore.

Joe: I am interested in every kind of music, every kind of sound. I like sounds! It could be the sound of a jet engine or a train or a car or wind or birds or anything. I am interested in sounds and those sounds, when you organize them make what we consider to be music I think, you know, because it already includes harmony and rhythm and melody. (Right now Joe was pushing on the table). I like sounds. 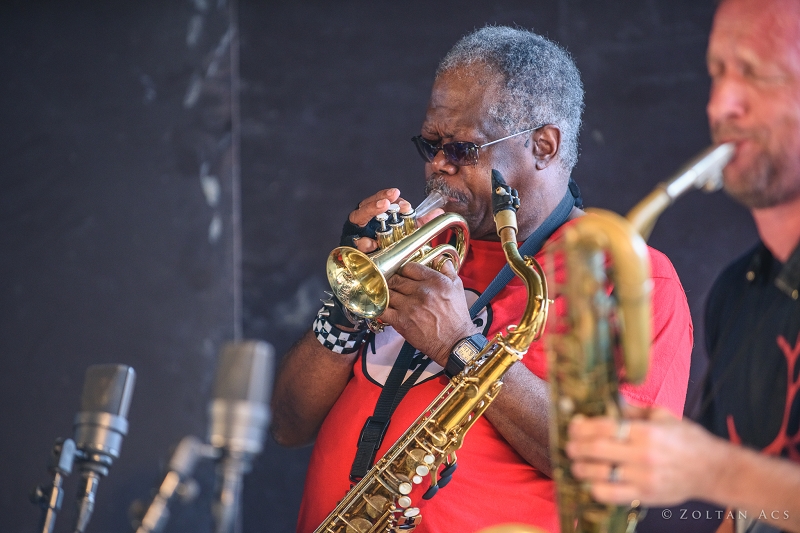 Joe: Well, it’s a process. It involves listening. A very good friend of mine, Pauline Oliveros, a marvelous composer and musician, philosopher and poet, had a concept of deep listening with the whole body, with the whole soul. Her idea is, that babies are the best listeners. They learn just without judging anything, they just listen and react and they are also probably the best improvisers. Until they go to school. Then it’s unlearning everything that they own in a natural way.

Bernd: Then the rules come, the teachers come… .

Joe: They teach them what’s right and what’s wrong. I don’t care about that. Of course, if you are going to break rules, you better know, what the rules are. And then you can find a way to find your own space in your own place. There are many ways to the same end.

Bernd: Are you a spiritual man? Are you a believer?

Joe: Well there is something out there, but I don’t know exactly, what it is I don’t know, how to put a name to it. I’m not so certain about that.

Bernd: When you play music on your instruments, you breathe air through your whole body, through all your cells, there are not just the lungs included, right?

Joe: Oh, no no no no. Those are physical things, those are physical parts of the body which make that kind of expression possible, which goes into those mechanical instruments. Why do I sing and everything like that? Because it’s a part of what I am, what the body can do and what I feel in the moment. I don’t plan to do that. (Pushing with his hands on the table). It just happens.

Bernd: I saw, you wear two wrist-watches on your arm!

Joe: Normally, ‚cause one of them has the time in New York and the other one has the time in Europe. Also, this is a Batman-watch! (Laughing). When I was a child I was very much a fan of that. When I went to school I made a Batman costume, wearing it under my clothes. And I always hoped, something would happen! So that I could go out like that! Even now, I still have all that with me, my true love! Batman is a very interesting character. As a character, as a vigilant, and maybe not the best kind of person, am always asking: Why is a man like this acting like this. And who does he think he is. Well, it’s a whole story about this Batman. Within a mythology.

Bernd: What will you do after this gig? 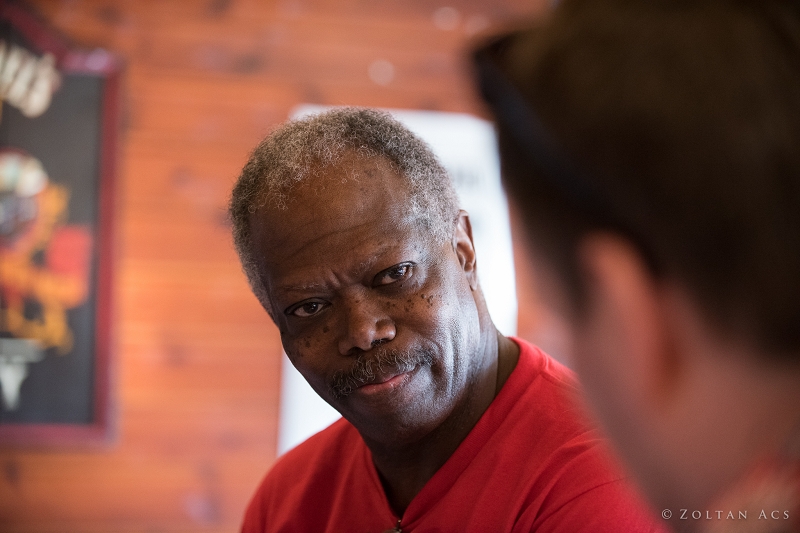 Joe: Next couple of days I’m going back to New York. Then I got some work in the States, with a very fine player, a woman, who plays pedal steel guitar, her name is Susan Alcorn. This will happen on the Cropped Out, Louisville, Kentucky, in September. She is a really amazing musician! We’ve played before and this festival will be a crazy Woodstock kind of a thing. I will also record with her.

Bernd: You will come back to Europe?

Joe: Yes! I’m playing next year with „The Thing“ and Mats Gustafsson have a new ensemble and we will play tunes that are dedicated to Little Richard. Which we played just a few days ago in France. It is an hour long piece which Mats composed. There are about ten people involved in the band. It has a big score, that he made and it’s based on Little Richard. He was really the inventor, the creator of what became Rock’n‘ Roll. People don’t say that, they say, it came from other people. Little Richard was a really interesting man.

Bernd: Are you also teaching? Do you have students?

Joe: Not at the moment. I did it for a while. Because I try not to teach people the way I play music. Maybe some ideas, but not technically, because I do a lot of things wrong. (Laughing).

Bernd: Why you say that?

Joe: I mean, if you wanna be a trumpet player in a philharmonic orchestra, you would never do, what I do there. Because it would kill you. But I play with two very fine trumpet players at the moment. One is Peter Evans. We play trumpet duo’s and Peter is an extraodinary player. Another player in Mats Gustafsson’s new orchestra, his new ensemble is Anders Nyquist. After a study at the Hong Kong Academy of Performing Arts he awarded a scholarship to continue his studies at the Royal Academy of Music in London. I’m sitting next to this man, who really can play great trumpet.
What I do is just the best I can do. I was not supposed to play trumpet and saxophone together, it’s maybe not a good idea, but I do it because I want to. I really love playing with this band, they are really great „The Thing“. And we drink very well together! (Laughing out loud!!).

Bernd: Thank you very much Joe!

Bernd: What are you doing next to music? You love something else than music in life to do?

Joe: What do I like to do… if I don’t play this music, I like to play some electronic music. I really love electronic music with some other instruments, when I can’t play the trumpet or the saxophone anymore. Because at some time, you just have to stop, because it’s just physically not possible all the time. Next to this, I’m just living my life. As long as I stay young and beautiful… !

We all are laughing, but with much respect! 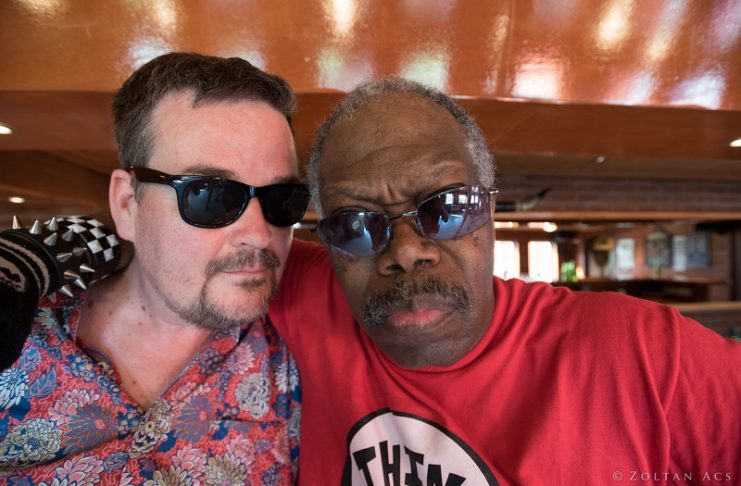 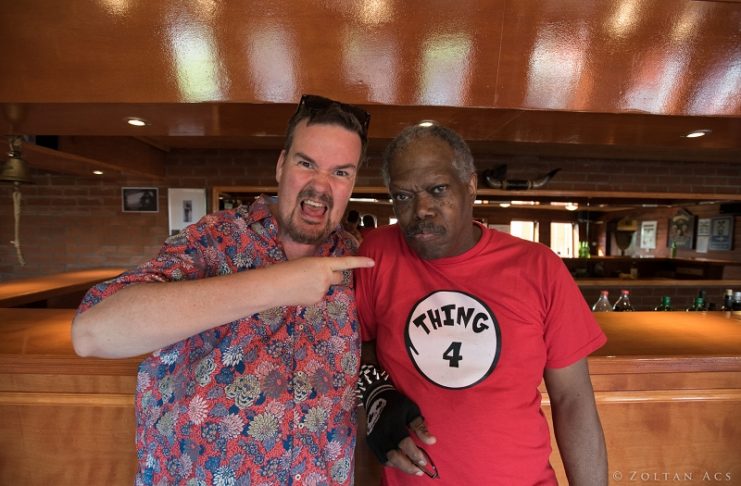 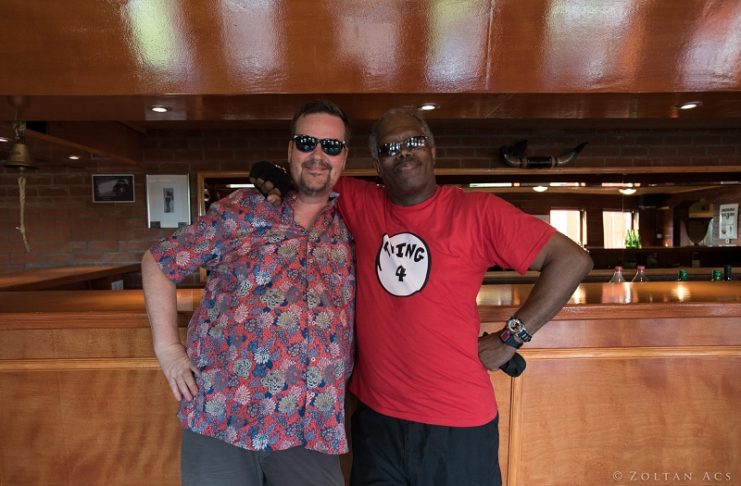 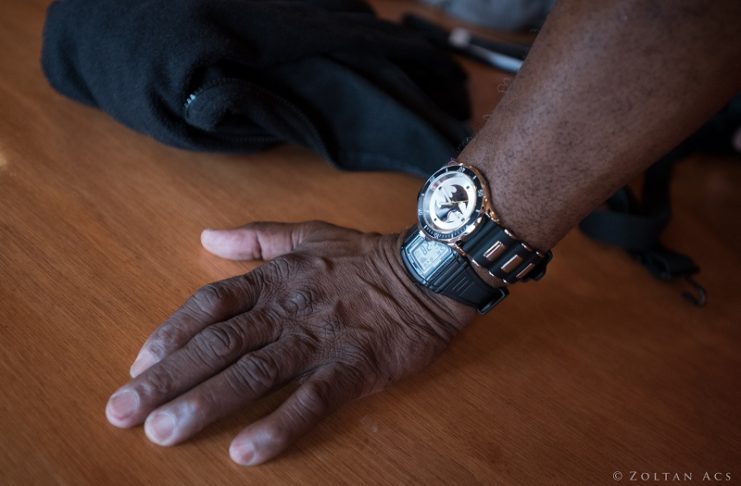 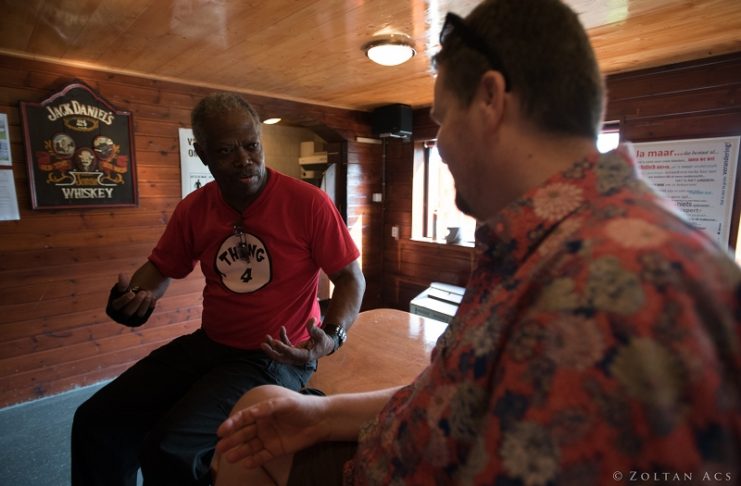 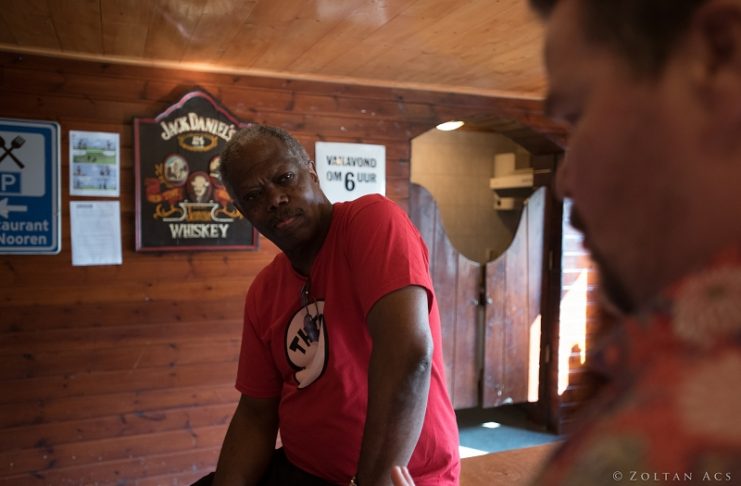 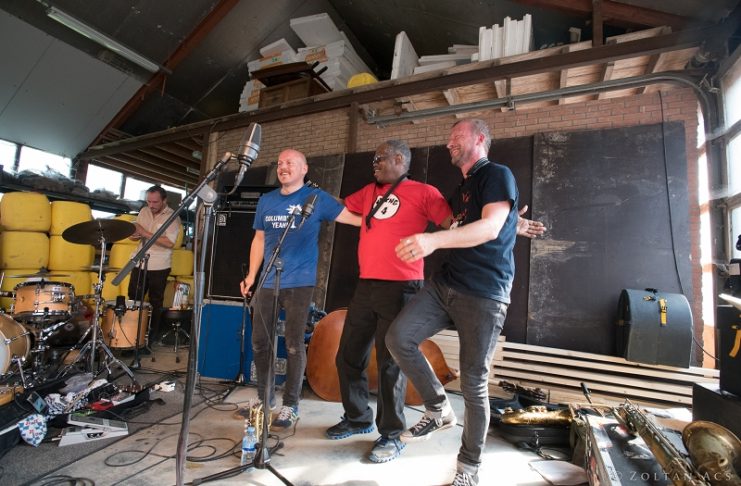 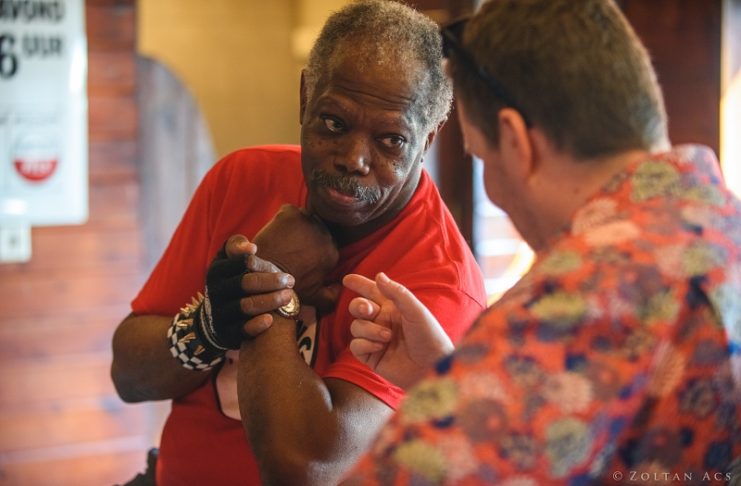 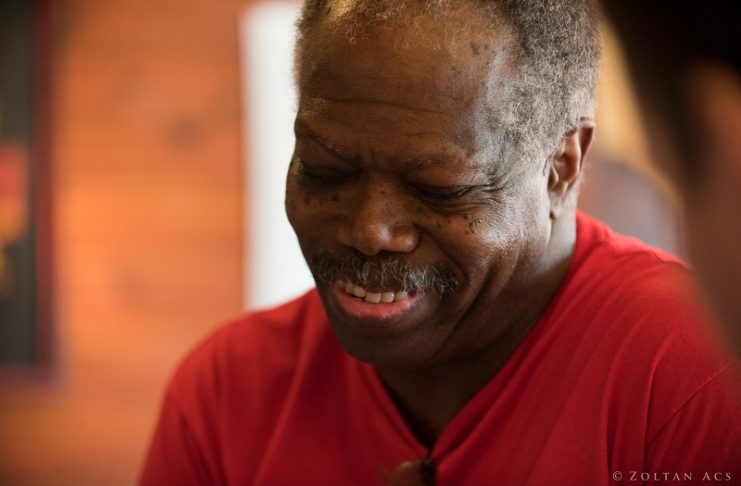 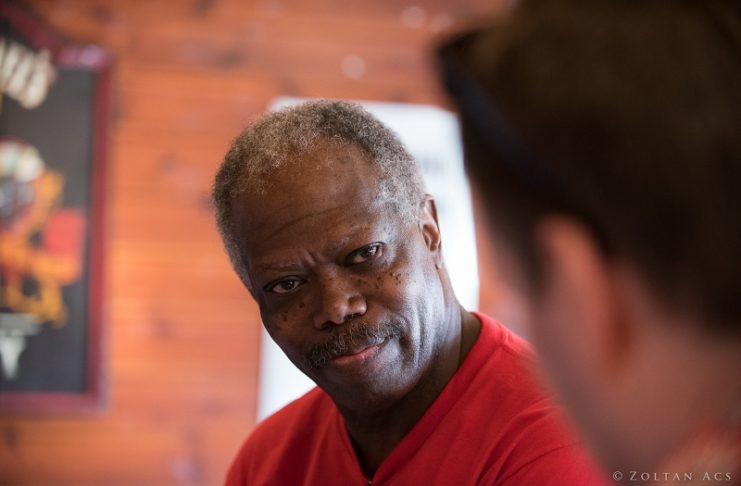 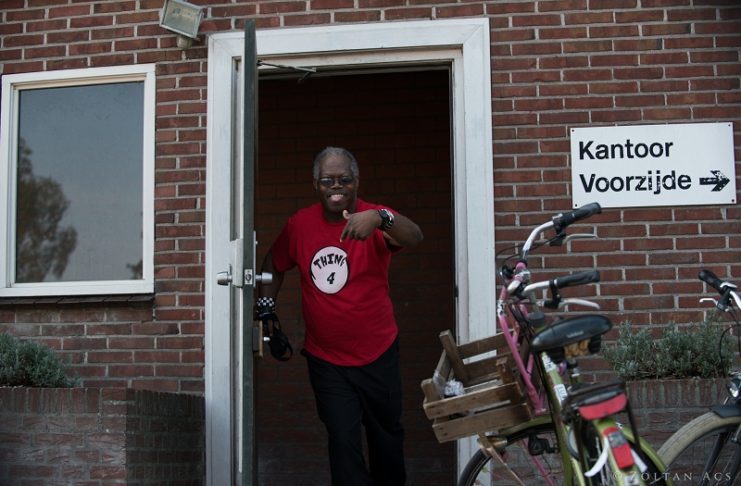 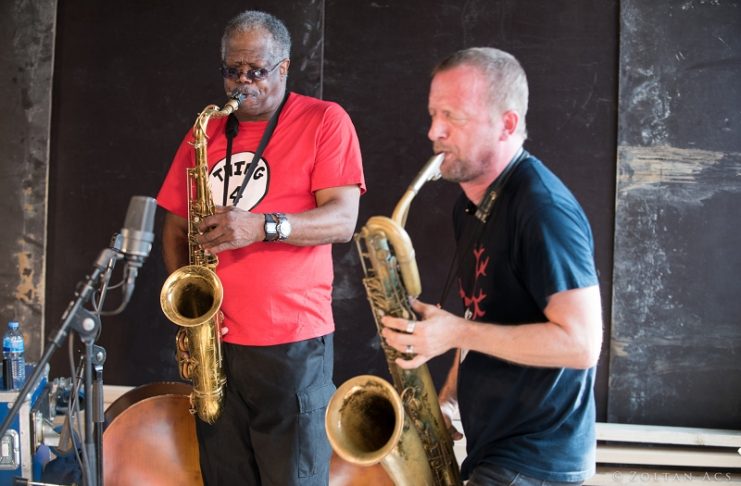 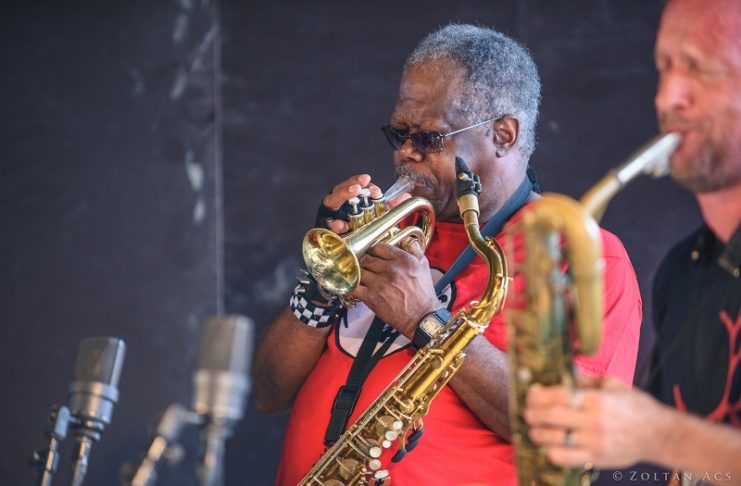 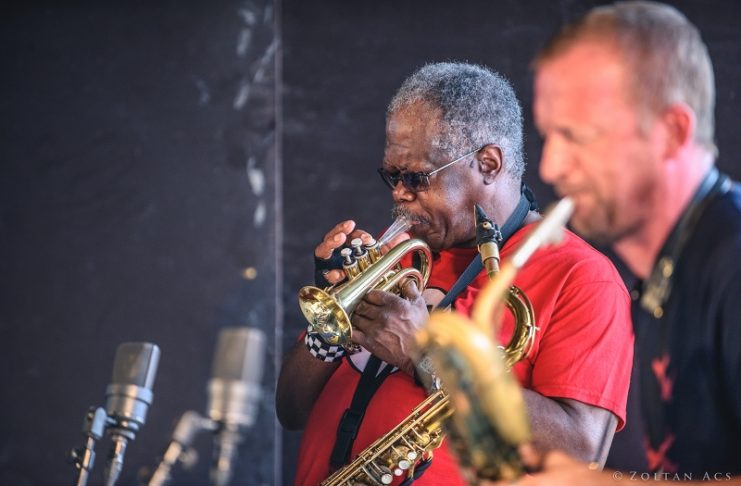