Grace Potter and the Nocturnals – The Lion, The Beast, The Beat.  A review by Tim 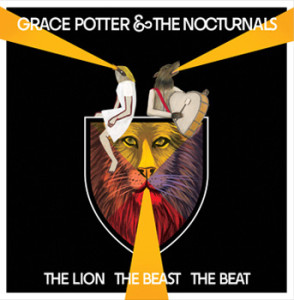 Gas up the easy rider and head out for Nevada. Can somebody let the beast out, baby?“ And let the beast out they did with the latest release form Grace Potter and the Nocturnals, „The Lion, The Beast, The Beat“, which Black Keys member Dan Auerbach collaborated,  only proves that Grace Potter and the Nocturnals are a force to be reckoned with. The title track is the result of a several month long road trip taken by Grace to find the right sound, the right song she wanted to have on this cd. Hard hitting like the blacktop road itself this is truely a song to drive by. Other songs such as „Parachute Heart“ demonstrate the vocal qualities she has become so known for. The almost country like „Stars“ is a powerful ballad that highlights Grace’s tender vocals. Ending with an amazing bonus track “ Ragged Company“ Featuring Willie Nelson, you sit silently thanking Grace Potter and the Nocturnals for this incredible ride.

Tonight I have come to witness first hand this force known as Grace Potter. The house lights dim, the stage lights brighten,the drums pound out a rhythmic beat and out she comes, dancing, jumping, smiling, this beautiful, brown eyed girl wearing a dress short enough to make her mother blush. Then she opens her mouth and sings, wow, does she ever sing. An amazing voice often times compared to rock and blues icons such as Janis Joplin and Koko Taylor.

She opens with the title song from the band’s latest release, „The lion, the beast, the beat“  and immediately she has your attention. Her voice goes places you just don’t expect from this young woman, amazing range, a raspiness that raises your eyebrows. You find yourself swaying to the heavy beat as this song ends. The lights dim and a spotlight focuses on her as she pours out emotions in „Hurt“. I am hooked. So this is Grace Potter.

A hippie of a girl raised in the „shire“ of her parents vision in Vermont. Influenced by the thousands of records, tapes and cd’s in their music collection, her music ranges from sultry blues to hard hitting rock. Throw in a little country and you have the unique mix that makes up the playlists of Grace Potter and the Nocturnals. Not only being the lead vocalist, Grace also plays many instruments including Hammond B3, Fender Rhodes, Wurlitzer Electric Piano, electric and acoustic guitar. Pretty good for someone that can’t read music and is legally blind. “ I don’t want to wear glasses or contacts, but it’s ok, it’s just blurry objects but I love it that way. I can tell people from shapes, hair color, voice and their vibe“ Grace says.

To me Grace Potter is a rare jewel in todays music. Her lyrics touch me and take me places not often done these days. I put my headphones on, grab a nice steaming cup of coffee and let the magic that is Grace Potter and the Nocturnals do its thing. Do yourself a favor, give this cd a listen, I think that like myself, you too will be hooked.

Grace Potter on twitter“I went DEEP into the woods today & talked music with a tree. Really„

Homepage: Grace Potter and the Nocturnals